It's an exciting weekend here on Coleridge Avenue.  Big day today, Daisy and I went to the park and played in the snow.  I threw the ball and she brought it back.  There was a fun moment where she lay on her back to rub in the snow and because it was on a hill, she went flying down the hill in the tracks of someone's toboggan.  Funnier for me than her though.

Then, a big laundry, vacuum, and clean up day.  Made 4 batches of dog food, which will last for about 20 days.

And after a nice dinner of vegetarian chili, I decided to open up some of the stuff mom and I canned in the summer, "Julie's Cajun Applesauce".  I called it cajun because while we were cooking, the old pot bottom burned and there were little black bits in the applesauce.  I wanted to throw the whole thing out but mom convinced me to keep it and we did, and made a few jars of it.  It's pretty good, though I'm not sure that Zestar apples were the best ones to use.  Maybe Pink Lady or Honeycrisp next year? 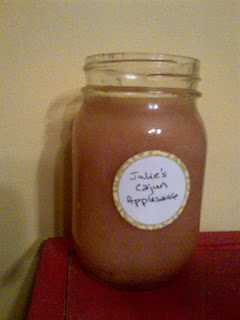 And, this is a first, a recommendation on the blog.  I have been eating this all week and I LOVE it.  I had to share with you because if you like maple, you might love this as much as I do!  It's called Nature's Path Organic "Crunchy Maple Sunrise".  Now that I've tried it, I understand why there were only two boxes left on the shelf when I bought it. 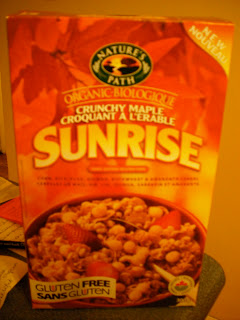