Tonight was so exciting, I've been looking forward to it all week.   Sure, it was fun to see Obama and Romney go at it earlier in the week.  But tonight was even better.

It was the debate at George Washington University between Jon Stewart and Bill O'Reilly.  What a fantastic show!  I have a newfound respect for Bill O'Reilly - I don't agree with his views but I really appreciate that he respectfully argued his position with Jon Stewart tonight.  Gotta like a guy who has a sense of humour and has principles (even if they're on the wrong side).    :) 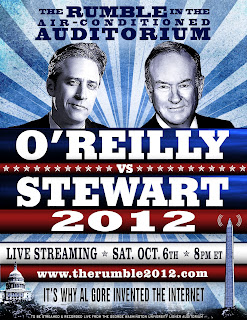