Last weekend was Kim's birthday.  She's one of those people who reminds others for weeks (months) in advance that her birthday is ahead, and wants to plan something special to do on her day.

This year she decided that the special thing to do was a visit to the Ontario Science Centre.  I've been living in Ontario for 19 years now (can hardly believe it) and I've never been to the Science Centre, and there's a reason for that - it's literally swarming with kids.  However as it was Kim's wish and Noah wanted to go, I agreed.

But first, Kim's presents.  I arrived at Kim's just before lunch and brought a small gift from me and one that Noah and I had bought for his mommy a few weeks ago.  I already gave Kim her big gifts from me - the two tours we took on our trip to NYC in November - so just had a little gift for her on her birthday, a Lego Builder's book that she wanted.

Noah also made a handmade card for his mommy for her birthday - here are Kim and Noah about to open her gift from him: 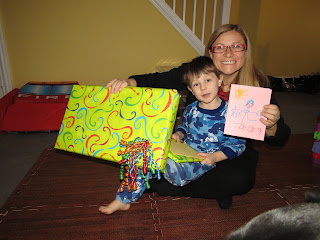 The present was a big hit, a retro lego hockey set.  Sometimes it's hard to figure out who likes lego more, Kim or Noah.  Noah picked this out when we went to the Courtice Flea Market a few weeks ago, at a vintage lego booth.   Noah's still in his Toronto Maple Leaf pyjamas as you can see - apparently they are his favourite and what a coincidence that Kim's favourite hockey team is also Noah's favourite team. 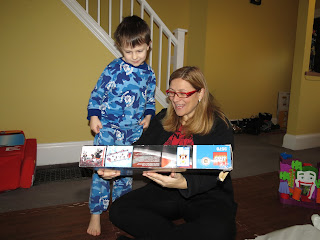 You can see how delighted Kim is with her new toy - I'm thinking she'll play with it and recreate the Leafs' last Stanley Cup win in 1967 when Kim was a 1-year old.  Will they win again in Kim's lifetime? 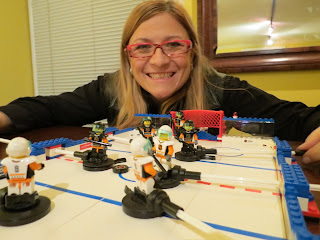 Off we went to the Ontario Science Centre, which was as I suspected, filled with hordes of snot-nosed children.  I swear I've never washed my hands so often as I have recently with this flu epidemic and the trip to the Science Centre raised my germ alert level to Defcon 1.

Not that the threat of microbes stopped Kim or Noah - here they are posing as astronauts: 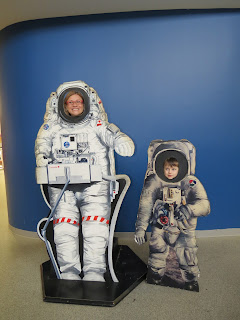 And then we went into an exhibit area that showed visitors how much water is in their bodies.  You step on a scale and the water flows into the display area - this was Kim's turn to see how much water was in her body, apparently about 46 litres: 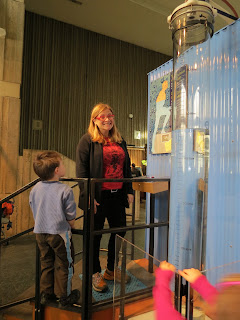 After a fun-filled afternoon at the Science Centre, we went to Boston Pizza for dinner.  Then back to Kim's for birthday cake.

I made the birthday cake and Noah decided on the decorations.  He wanted to put rings on mommy's cake so I bought some rings at a local toy store as well as some icing pens.  Noah placed the rings and  decorated the cake with the icing pens.  I think it turned out really nicely! 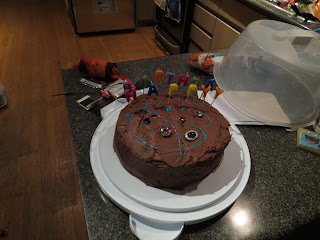 And here they are, ready to blow out the candles: 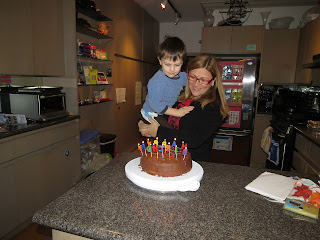 One of the special events of the day was opening cards, from Noah, me and one from my Auntie Jan and Uncle Dave.  Can you believe it?  My darling, thoughtful lovely Auntie Jan remembered it was Kim's birthday and took the time to send her a card!

I feel so special to have such a wonderful Auntie Jan and of course a charming Uncle Dave, and I can hardly wait to spend Christmas with them this year.

Thanks Auntie Jan for adding such a special touch to Kim's special day.
Posted by Sherri at 10:49 PM