Last week's trip to NYC was great!  Kim and I had an amazing time, we just shopped, shopped and shopped some more.

Each of us brought back shoes, clothes and makeup, enough that we had to bring back two suitcases each and carry on luggage too.   I'd like to think that we made a healthy contribution to the US economy.  :)

Here's a picture of my shopping stash piled high on my bed - it doesn't really do the purchases justice.  The personal shopper we booked took us all over the place and we got some amazing deals - and then we each spent another bundle at Sephora on makeup. 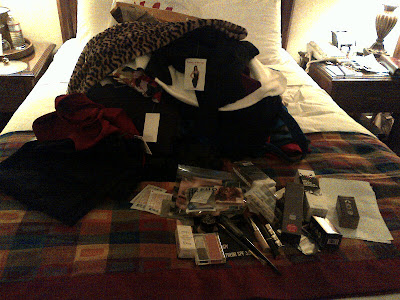 The hotel was expensive but I really think it was worth every penny (not sure Kim totally agrees on this point).  It was literally steps away from Times Square, just a tiny hotel tucked in on 43rd Street.  The service was personal, the breakfast and snackies were great, and the hotel general manager hugged us both when we left.  When was the last time that happened anywhere you visited?  I vote for staying there again next year, we'll see what happens on that front.  It's such a small hotel that it was hard to get reservations - I booked in June and secured the very last room with two double beds.  The hotel has literally got only about 50 - 60 rooms, it's tiny, and charming.

We went out for dinner on Tuesday and Wednesday evening.  Tuesday night we went to Kim's favourite place, Tao, and it was a bit of a disappointment in terms of the food.  But the restaurant was amazing, it has an absolutely massive Buddha 16-foot statue that stands up basically two stories.  The building that houses the restaurant was once stables and then a movie theatre, so you can imagine how high it is inside.

On Wednesday night we went to my choice, a vegan restaurant called Candle 79.  It was delicious!  I think Kim was a little iffy on some of the tofu items but her main course was a mushroom risotto, it was the best thing we had on the trip.  I wish I had ordered it - mine was pretty good, but not as tasty as the mushroom risotto.

The night we went to Candle 79 it snowed, and the subways were stuck.  It was tough getting up to the restaurant but we managed to snag a taxi after the subways stopped.

Before we knew about the subway problem we walked to Grand Central Station to pick up the subway to 79th Street, here's a picture as we approached the station so you can see the snow that was starting to pile up. 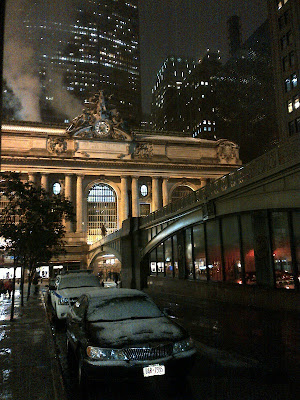 We had such a good time, we decided to make this an annual trip!  A little later in November and we'll be able to catch all of the Christmas decorations - some stores were just starting to bring them out when we were there.