Prepping for the Big One

Yes it's true, I'm a "Prepper".   Not a very good one, though, by most standards.  Most preppers are getting ready for The End Of The World As We Know It by gathering together food, water and other supplies.  Not me.  Sure, these things are important but I've got something else to worry about.

My focus for prepping has been figuring out how I'm going to continue sewing when there's no more electricity.  What else would someone with the world's largest fabric stash be worried about?  For some time, I've been looking for a treadle sewing machine in good working condition.

I recently joined a group called "Freecycle Toronto".  It's an online group where you post items you want to give away.  You can also respond to posts from other people if you want whatever they've posted.  The idea is to keep stuff out of landfills and so everything is free and in varying states of new (or not).  A lot of the stuff that gets posted are small items - things like a bag a dog food that was just opened and that the dog won't eat.  Or a few bricks or other materials left over from recent construction projects.  But there are also things like furniture and even a piano a couple of weeks ago.  If I had the space I could fill my house with treasures from Freecycle members.

Guess what was posted this morning on Freecycle when I woke up?  Yes, indeed, a treadle sewing machine.  I jumped at the chance to go and see it - it was located super close to home.  The woman who posted it was given it by her mother, who had received it as a wedding gift in 1939.  It's not in perfect shape - the belt is broken, there's no manual, and there are no accessories or other things (like sewing feet), but it was free.

I had some help putting it in the car and then unloading it at this end, still can't lift or move anything with my back.  The thing is mighty heavy, the top of the cabinet is wood and the base is cast iron.

Turns out it's a Singer treadle model 15-96, made in 1938 in Quebec.  It needs some TLC and a good clean - the woman who owned it was a very heavy smoker.  I didn't buy it as a collectible, it's to be used when the world ends so I'm just interested in making it workable, not in making it pretty.

Here's what it looks like - it came in a wooden cabinet with the foot treadle at the bottom. 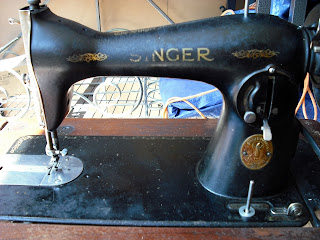 Notice how the "S" and "I" are worn off?  The previous owner had wrapped a piece of wool felt around that part of the machine and hand-stitched it to stay there.  She used it as a sort of pin-cushion, and there were pins and needs stuck in it when I picked it up.  Unfortunately it's caused little pin scratches all over that part of the machine but I think that's just part of the charm and history.

I've ordered a new belt online (let's hope it fits, it's hard to tell when buying this way) and some Singer machine oil.  When it arrives I'll be able to do a little maintenance and then see if it works!