June was a busy month, starting with getting the garden cleaned up.  You can see I had some helpers - Tipsy was supervising, that's her on the deck.  Tula watched from the chair and you can see Bert and Peggy near the shaded patio stones.

I went with a largely red theme this year.  Now that it's been in place for a couple of months I've learned that the red begonias and new guinea impatiens were successful; the red gerbera and double impatiens were not.  Also the planters look nice in this picture but they're pretty much dead at this point - I found it tough to water them fully when they're so high up.  Next year, I need to find these thingys and get them up at the start of the season so it's easier to water. 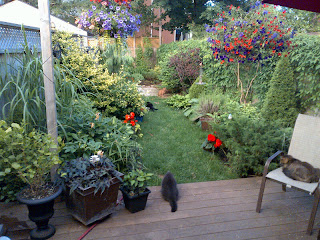 Each week at work we have "treat day" on Thursdays, and every three months it's my turn to bring in treats.  So for my treat day in mid-June I decided to do a mix of healthy and tasty treats.  Healthy treats being veggies and dip; tasty being cookies.  For fun, I put some signs up, indicating healthy and tasty treats. At noon on treat day, here's what was left of my treats: 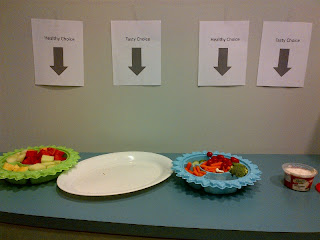 Work has been busy and we implemented Employee Self Service, an online system for employees.  I wanted to do something special but didn't have a lot of time, so Kim agreed to make some ESS cupcakes which were a big hit at work.  Thanks Kim - she's such a great baker! 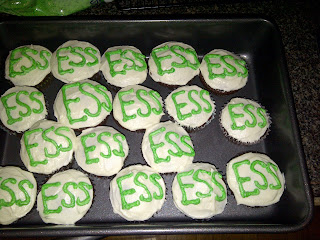 Along with my refreshed garden I welcomed a little friend, a raccoon mom who came by every night for some snackies.  Things were going well for us until she started bringing her babies, and then they decided to invite friends along for rowdy parties every night.   One night I awoke to find raccoons EVERYWHERE in the back, including swinging from the patio umbrella.  Oops. 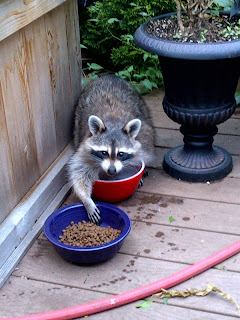 Daisy of course is perfect and wonderful as usual, here's a photo of Daisy in the daisies, taken by my neighbour Patty: 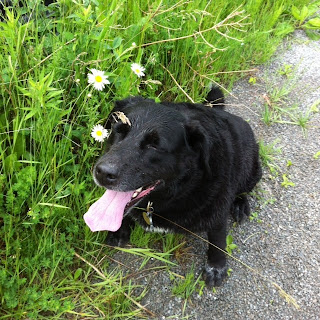