I started off with such promise!  I'm just going to say that work and my back injury in the summer really got in the way on this one.  I think I got one project done, which is totally lame.   For 2013, this has to be a goal, the projects and fabric are seriously piling up.  Need to get the back fixed up though before I can do too much.

Hmmmm....  I did make one extra payment toward the loan, but then got distracted with something or other.  This is a goal for 2013 too.

See explanation for not achieving Goal #1.  Now the good news is that as a result of some jewelry classes coming up in January and February, you can probably count on receiving either sewn stuff or jewelry stuff next Christmas.

The first class I took at our local technical college in November was pearl knotting, which is surprisingly challenging.  I made this little freshwater pearl necklace and bracelet, and while the knots aren't bad, there are other problems.  Like where the silk thread broke halfway through and I had to glue another bit on, etc.  Anyway it's another skill and I'm sure to eventually get the hang of it, let's hope I get better before I start making your Christmas present. 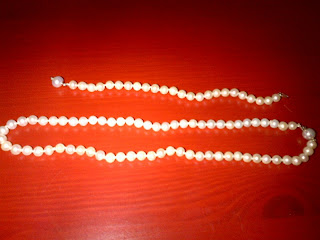