Highlights from this year's Christmas!

The 2012 tree was nice, but look at the new mantlepiece, courtesy of my pal Brad!  Still need to do some work to make the mantlepiece perfect, but it was nice to have somewhere to hang the stockings for Daisy, the kitties and me. 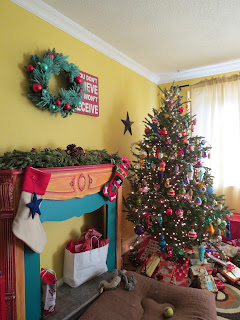 I gave Kim a quilt for Christmas, and since Noah is my biggest quilt fan, it went straight onto his bed.  How wonderful to have such a quilt lover - hope that lasts as he get older. Noah is a spectacular cake decorator, he takes after his mommy this way.  Here he is after he placed the decorations on the Happy Birthday Jesus cake for Christmas dinner.  Still not sure about this tradition, seems to me there should be 2012 candles on the cake, but Kim and Noah looked at me like I was wacky when I suggested adding all of the candles, so have to leave this idea for now.  Noah added a full manger scene including the camel and the wiseman, nice one Noah. 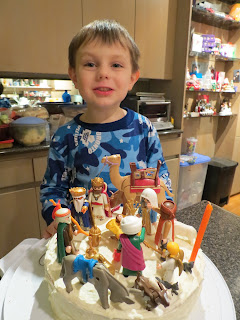 I feel totally spoiled, I received so many gifts!  So many wonderful things to use, to wear, to read.  Even as fun as it was to unwrap everything, it was still the most fun watching Noah open up his gifts.  He was pretty excited about the Forest Police lego set from Auntie P.  Here are his Auntie P gifts.  (Notice that Kim has yellow walls just like Auntie P - we both chose the same Farrow and Ball paint for our living rooms.) 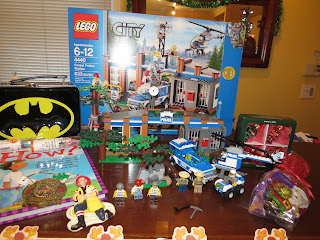 One of the best things from this Christmas was committing to "Wrapped and Done by December One".  The idea came from one of the blogs I follow and it was a great one!  It's the first time I've been totally done early - no wrapping Christmas Eve.  It was kinda nice to watch everyone at working running around shopping at lunch every day, knowing I was totally done.  Mom and Kim liked the concept too.  This idea is a keeper for sure.
Posted by Sherri at 12:38 PM